Justin wrote, directed, and starred in the film. 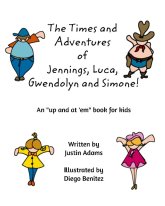 In 2017 Justin wrote and published the children’s book: “The Times and Adventures of Jennings, Luca, Gwendolyn and Simone.”

You can learn more and also purchase a copy by visiting here.

In 2015 Ricochet NOW Productions teamed up with The Sokoroni Theatre Project to raise awareness on the importance of girl’s education through theatre and music in Burkina Faso.

The Sokoroni Theatre Project toured an educational play in nine rural villages in southwest Burkina Faso reaching an audience of over 4,500 people.

Learn more about the experience here.

Or feel free to click the following link to read a short memoir on the experience.

In 2012, Ricochet NOW Productions produced “The Man-Made Rock,” by Justin Adams, at the 4th Street Theatre in Manhattan.

In 2010, Justin’s play, “The Husk of True Faith,” was selected as a semi-finalist in the Eugene O’Neill National Playwrights Festival.